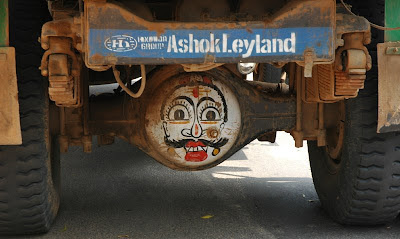 At first glance it is utter chaos, however after being driven around for a while a number of things become apparent:

Rear view mirrors are not used unless the driver’s attention is alerted by a horn blast. Overtaking may take place in any lane, including the verge. Going round roundabouts clockwise is optional. When turning right on to a busy street, if turning right again after a short while, it is acceptable to drive up the road on the wrong side rather than crossing the traffic. Traffic lights are for guidance purposes only. When turning right or onto a main road it is not necessary to wait for a break in traffic. Communication with other vehicles and pedestrians is by horn. For example a short beep means, “Hello, I’m behind you, please get out of the way so I can come past.” A longer beep means “Look I asked you once nicely, will you move over now.” A prolonged blast means “Are you fecking deaf or what, get out of my way you bastard.” The equation would seem to be that the better the driver, the less he will need to use his horn.

Traffic control is achieved by the occasional policeman with a whistle, random crash barriers across half the road, road works, potholes and unmarked sleeping policemen. These last are often placed just before junctions to give other traffic a fighting chance of joining the flow.

Having said all this there is a great disincentive to causing an accident. Should you kill or injure somebody you run a great risk of being attacked by an angry mob. While we were in Bangalore a careless bus driver ran into the back of a motorcycle, killing the rider, who landed on his head. The enraged populace burnt out three buses from the same bus company, although they did allow the passengers off first. Given that most motorcyclists ride without helmets, many have their wives sitting sidesaddle on the back, and sometimes a couple of small children on the petrol tank the possibilities of serious injury, when in collision with a bike, even at slow speeds, are pretty high. Yet despite the fact that most buses, some trucks and cars look as though their bodywork has been shaped with a sledgehammer in many days of driving we only passed the aftermath of one serious accident, where a bus, probably heavily overloaded, had rolled down an embankment at the side of the road. 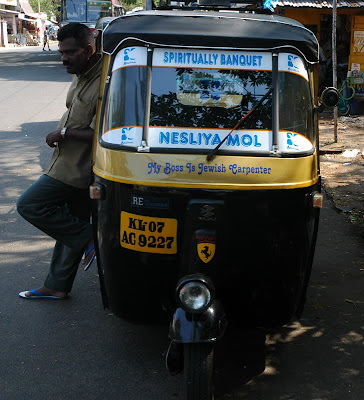