We are on holiday on the island of Anglesey in Wales. Having walked in to Beaumaris we stroll along the front. After checking out a boatyard at Gallows Point we decide to try and make it a round walk. On the map we can see a bridge that goes over the road past the cemetery with an un-metalled way marked on it. Climbing up the hill we find the bridge and an unfenced track that takes us to the bridge above. To the left the track goes off for a couple of clicks to the coast road and later the penny drops that at that far end is where some very ornate gates are. Our way is to the right. After about half a K down a good path through dense woodland we come to a second bridge over another public road. Just before it is a ruined stone house built into the hillside. The front is of dressed stone with a rough stone extension at the back. The roof is gone as are the interior timbers leaving its three story height open to the elements. Trees are encroaching on the walls, roots finding their way through the stonework. 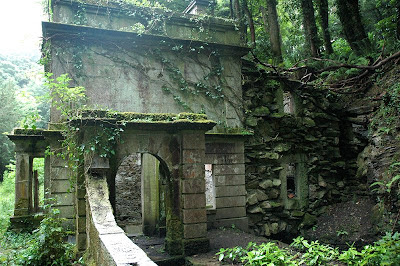 After a brief exploration of the gutted building we press on over the bridge and shortly afterwards notice a flight of wide shallow steps to our right. Some way down the steps, near their bottom and in the centre, a narrow entrance contains a steeper flight of stairs descending into darkness. We feel our way down cautiously and come to a T-junction. At either side are exits bathed in gloomy green light. We take one each and find ourselves on either side of a semi circle of stone columns. Beyond is an arrangement of low stone walls. Rhododendrons of huge size are everywhere creating an impassable jungle. We are looking at the remains of what was a formal garden and the stairs we descended lead from what was once a viewing point.

We retrace our steps and continue along the track. After a short distance the way bends to the right, then left again and we are confronted by the remains of an enormous house, looming out of the dense woodland, Like the first building we came to, the roof is gone, together with all the interior timbers. In the centre there are traces of an older stone house but the majority of the building would seem to be Victorian. Here and there are traces of the house’s former glory, some flaking, moulded plasterwork, a beautifully jointed, but now partially collapsed, stone staircase and pieces of slate baluster.

At the end of the south wing are Kitchens, servant’s quarters, the boiler house, stables, coach houses and a large greenhouse frame. At the front of the house above the main entrance is a big balcony, which once gave views across formal gardens, down over parkland to Beaumaris Castle and the strait beyond. Low walls and staircases remain poking out from the jungle of trees and shrubs that becomes impenetrable within a few metres of the house.

In the green gloom and light drizzle the mood, although tinged with excitement at the enormity of the find, is one of melancholy decay. How the mighty are fallen. 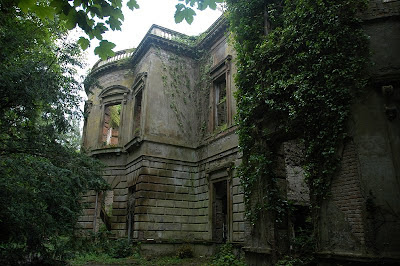 Later on a little digging around reveals that it was the Bulkeley family estate. Not far away on a hilltop that can be seen for miles is an obelisk, which is the Bulkeley Memorial and in Beaumaris Church is a heavily graffitied alabaster tomb from about 1490 containing the remains of a William Bulkeley and his wife.

I met a traveler from an antique land,
Who said: Two vast and trunkless legs of stone
Stand in the desert. Near them, on the sand,
Half sunk, a shattered visage lies, whose frown,
And wrinkled lip, and sneer of cold command,
Tell that its sculptor well those passions read,
Which yet survive, stamped on these lifeless things,
The hand that mocked them, and the heart that fed;
And on the pedestal these words appear:
"My name is Ozymandias, King of Kings:
Look on my works, ye Mighty, and despair!"
Nothing beside remains. Round the decay
Of that colossal wreck, boundless and bare
The lone and level sands stretch far away.

Not quite sands here but you get the point. 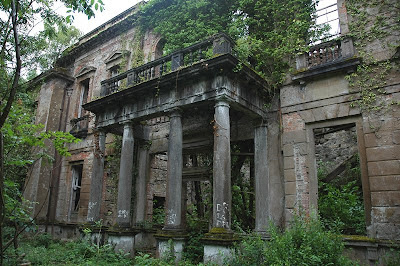