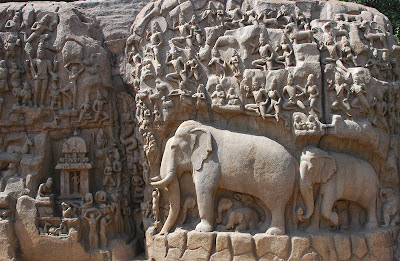 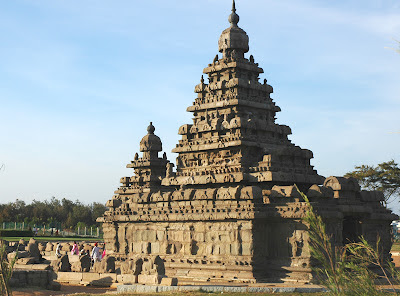 I first visited this southern Indian coastal town twenty-three years ago. It was a quiet place made remarkable by the stunning shore and rock cut temples, huge relief carvings on the granite boulders, together with a school for sculpture and a town full of practising sculptors working in stone.

The intervening years have transformed it to a noisy, bustling, tourist hustling destination. It is now 5$ US for foreigners to visit the Five Rathas and the Shore Temples, which incidentally are no longer on the shore. A rocky promontory has been built separating them from the sea, under the auspices of UNESCO, ostensibly to protect the stone and foundations of the temples from salt-water erosion. They are indeed badly eroded, however as they were built 1300 years ago this is hardly surprising. The altered setting puts the temples some distance from the sea and has deprived the buildings of a considerable amount of drama, but made it easier to enclose them and thus charge for entrance. (Is this cynicism on my part? Treatments exist to seal and protect stone; surely this, together with rocks to break the force of the waves, would have been an aesthetically better solution.)

Having said this it is still a rewarding visit. The rock cut temples are extraordinary. The Five Rathas were created around 630 AD and are a set of monolithic, carved granite interpretations of the major wooden temple styles of the period. The mind boggles at the amount of work required to realise these buildings, especially in such hard and intractable stone. There are other rock cut and cave temples around the town together with relief carvings, including the magnificent ‘Arjuna’s Penance’ depicting the descent of the Ganges. The riverbed is represented by a cleft in the rock surrounded by people and animals, including some beautifully carved elephants. The Shore Temples are from a slightly later period, around 700 and are made from dressed blocks of granite.

Three of the Five Rathas 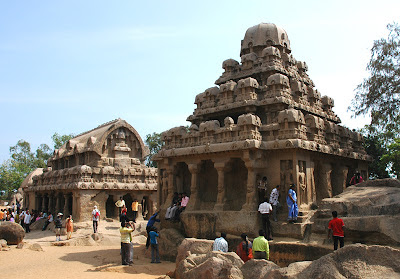 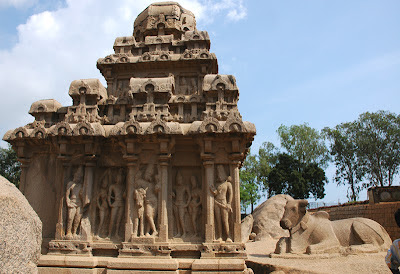 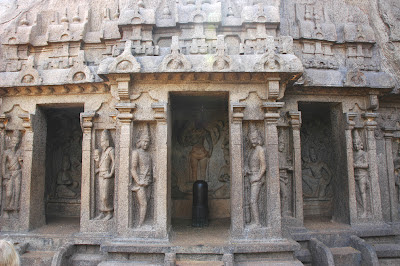 Although large-scale tourist development has invaded the town with many hotels and shops flogging stuff from all over India, there are still plenty of sculptors at work there, some of them producing extremely fine work. The large-scale pieces are predominantly in granite, with smaller work in softer stone that allows fine detail. There is also bronze casting using the lost wax method and the school of sculpture continues to thrive. 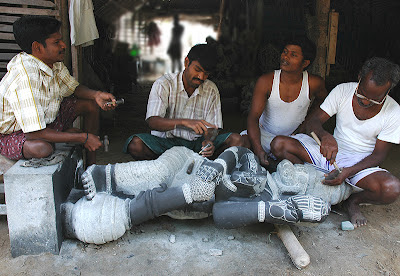