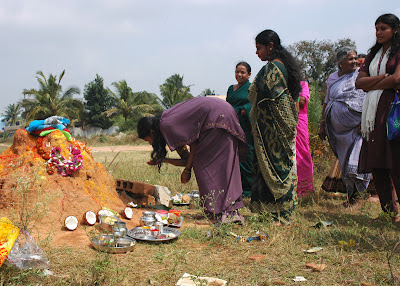 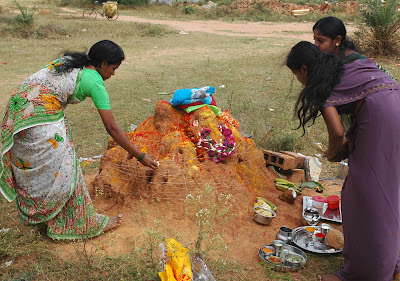 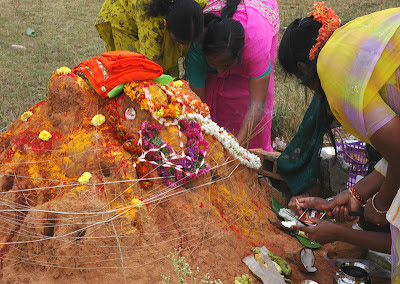 Wandering along a back road in a Bangalore suburb we had passed an old termite mound that had been wound around with string, covered with the scattered remains of flower garlands and anointed with orange and red pigment. I assumed it was sacred for some reason, but thought no more about it until, on February 12th when passing that way again, we found the hillock, and another we had not previously noticed, to be a hive of activity. A crowd of women, watched by a man and a small boy were taking it in turns to make offerings to the old nests. They had garlanded them with fresh flowers, coloured powder and made offerings of rice, banana and coconut, stuffing some of the rice into holes, then carefully wound new string round the mounds, completing the effect with bunches of smoking joss sticks.

At the second, and more popular, of the two hillocks we were made welcome and given bits of banana and sweet rice to eat. A teenage girl in the group spoke good English and explained that it was the day to make offerings to the snake. We noticed a neatly folded sari on top of the nest and enquired as to its purpose but she was unable to explain, just saying that it was something that had always been done.

T. Richard Blurton, in his book on Hindu Art casts some light on to what we were witnessing. The Cobra (Naga) is a creature associated with the god Shiva. ‘In the linga form of the god snakes are often shown carved around the shaft or are seen swimming up the path of the yoni. The phallic imagery of such usage is clear.’ He goes on to explain that because of the snake’s links to fertility and due to the fact that they often take over old ant hills for their burrows, these are often made into Naga shrines, which are especially visited by women seeking the birth of male children. They will conduct special pujas there leaving food, milk, glass bangles and miniature cradles. Shiva and the Naga are very popular in this part of India and we had noticed many shrines featuring sculpted cobras, often intertwining.

A possible explanation for the folded saris on the termite hill is that during the course of a normal puja, the god is often garlanded with flowers and dressed in fine material. It is not really feasible to do this with the mound so perhaps the garments placed on the top are a gesture in this direction. 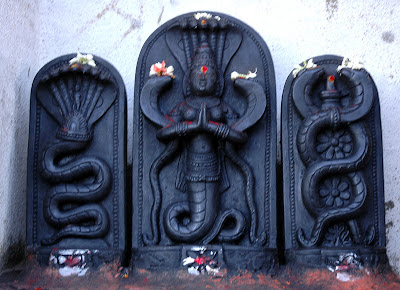